Our Favourite Moments From The Princely Wedding Of Harry And Meghan

June 1, 2018 | by Admin | Comments Off on Our Favourite Moments From The Princely Wedding Of Harry And Meghan

From the day the Prince of Wales announced the engagement of his son Prince Harry to Ms. Meghan Markle we began counting down the days for what we knew would be a magnificent fairytale event !

The beautiful wedding took place at Windsor Castle with the ceremony at St George’s Chapel on Saturday 19th May. The absolutely stunning bride walked half of the aisle alone but was met half way up by her father in law to be Prince Charles .The brides understated, elegant  gown and Cathedral length veil completed the scene for the fairytale wedding.

Following the service, the couple travelled around Windsor in a horse-drawn carriage, providing an opportunity for members of the public to see them up close and to join in the celebrations.

Our first photograph is the family group photo taken in the magnificent Windsor Palace green lounge.

A classic image, in the right line of official photos of the British royal family. 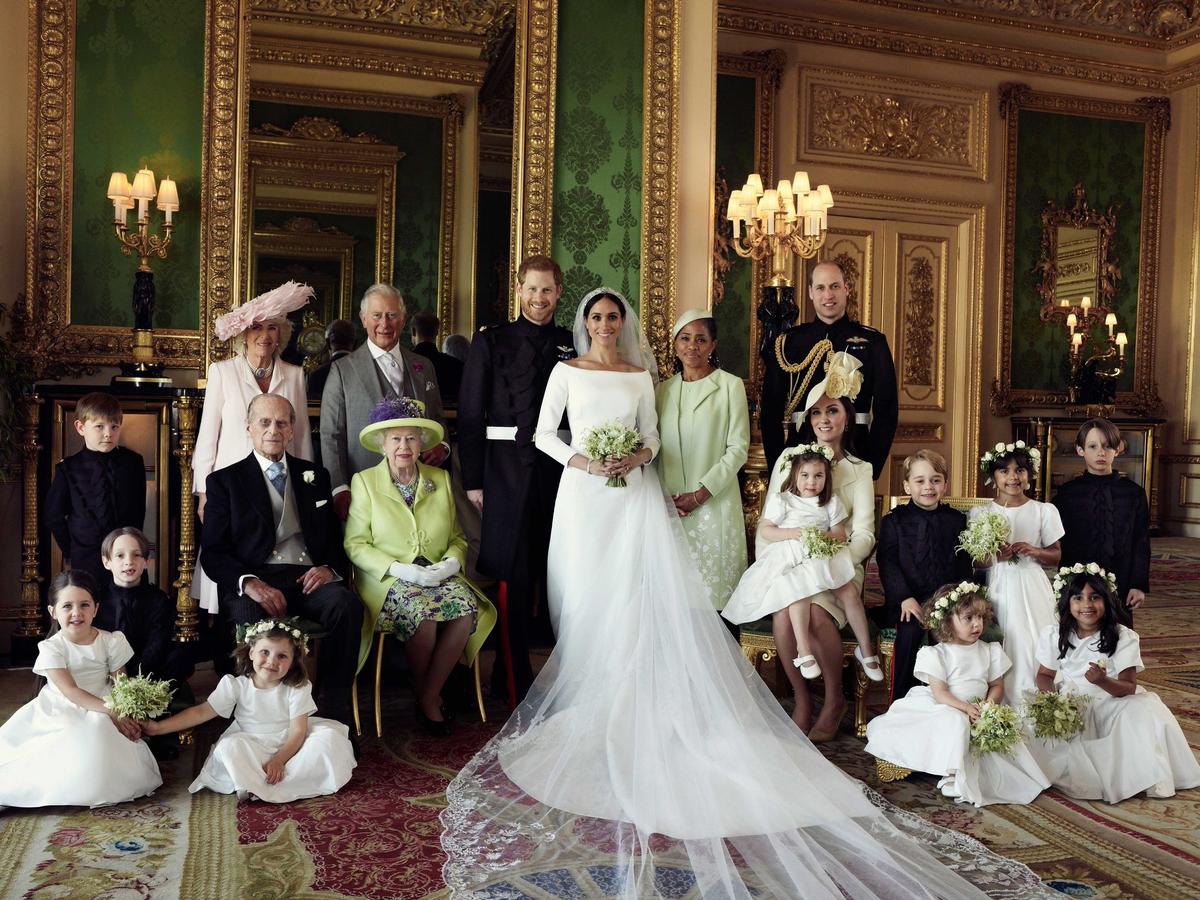 Shot still in the Windsor Castle lounge, the fabulous newlyweds with their four page boys and six bridesmaids, including George and Charlotte from Cambridge.

Aquazzura shoes, and a floral wreath made by florist Philippa Craddock completed the little girls look.

As for the boys, they wore Prince Harry’s military uniform, in a mini version. 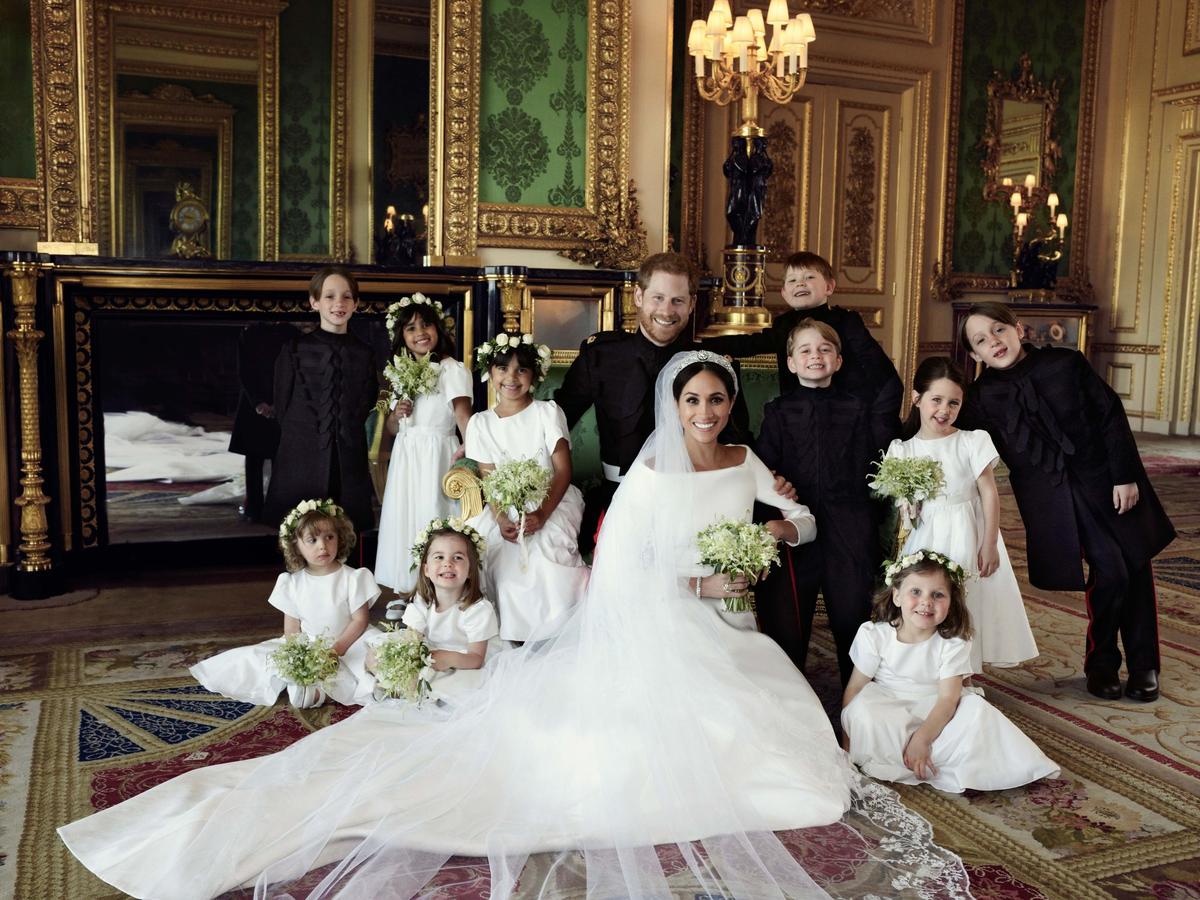 It was a traditional lemon and elderflower cake, which “incorporated the bright flavours of spring”, and was covered with buttercream.

It was designed by Claire Ptak and features elderflower syrup made at The Queen’s residence in Sandringham from the estate’s own elderflower trees, as well as a light sponge cake uniquely formulated for the couples. 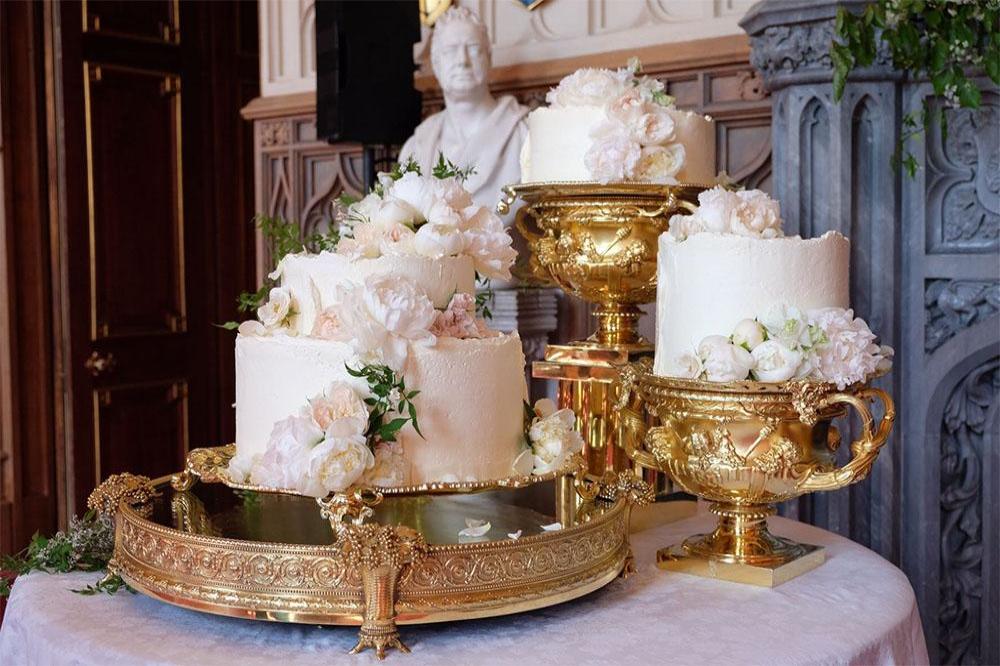 The Second Dress And Tux

Prince Harry and Meghan Markle, choose floral designer Philippa Craddock to create the church flowers for their May nuptials. The beautiful choice flowers were white garden roses, peonies and foxgloves. Meghan’s love of peonies is well known having often shared images of peonies on her former Instagram page, indicating they were her favourite flower.

Meghan’s stunning flower arch took a team of 28 to arrange… and there was a hidden tribute to Princess Diana , the arch was composed of white roses the favorite flower of Princess Diana.

While the entrance to St George’s Chapel was decorated with a stunning matching flower wall. 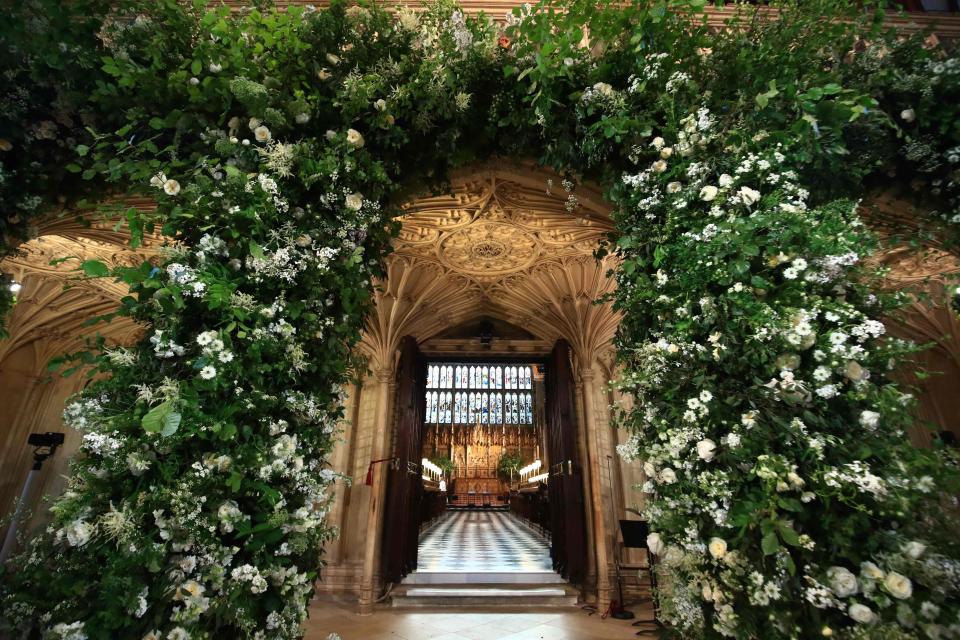 Prince Harry and Meghan Markle choose a royal carriage for their transport around Windsor just after their wedding. The carriage was pulled by four grey Windsor horses: Milford Haven, Storm, Plymouth and Tyrone.

The second wedding car of Meghan Markle and prince Harry was a Jaguar E-Type Zero which Harry drove them in to the evening party. 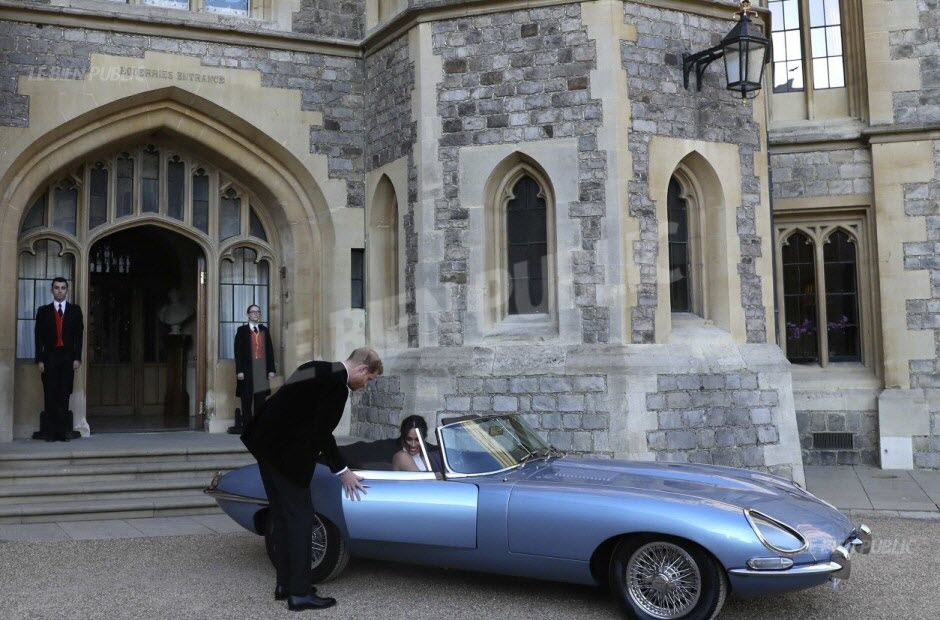 The guests began arriving in Windsor from 10 am on the morning! 600 VIP guests attended the wedding of Prince Harry and Meghan Markle at St. George’s Chapel. Among them, members of the royal family, friends, dignitaries and  also celebrities including Meghan’s fellow “Suits” actors.

Anyone lucky enough to receive an invitation was bound to respect a dress code: hat for women, tail coat suits for men, bright colours of rigor, black was forbidden and ladies had to have covered shoulders. 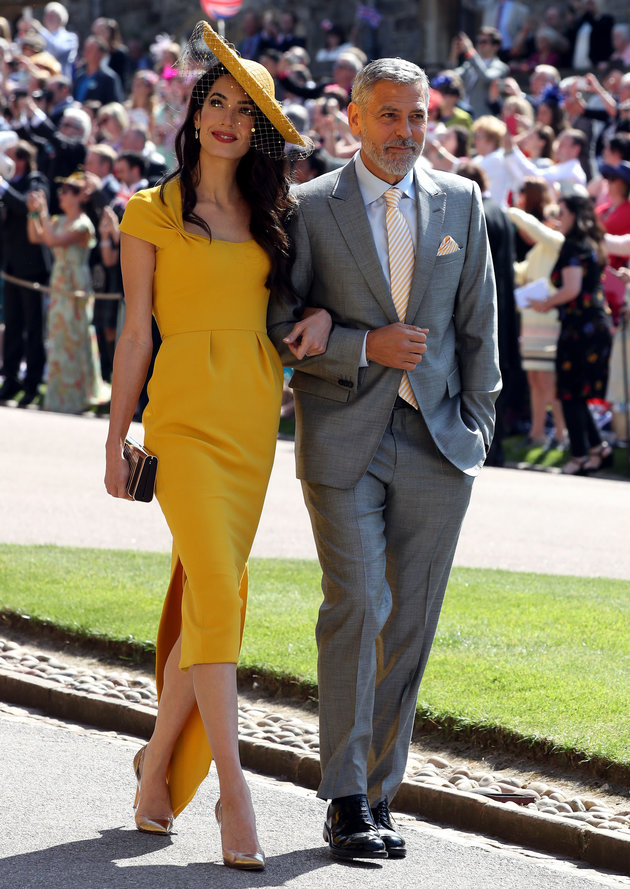 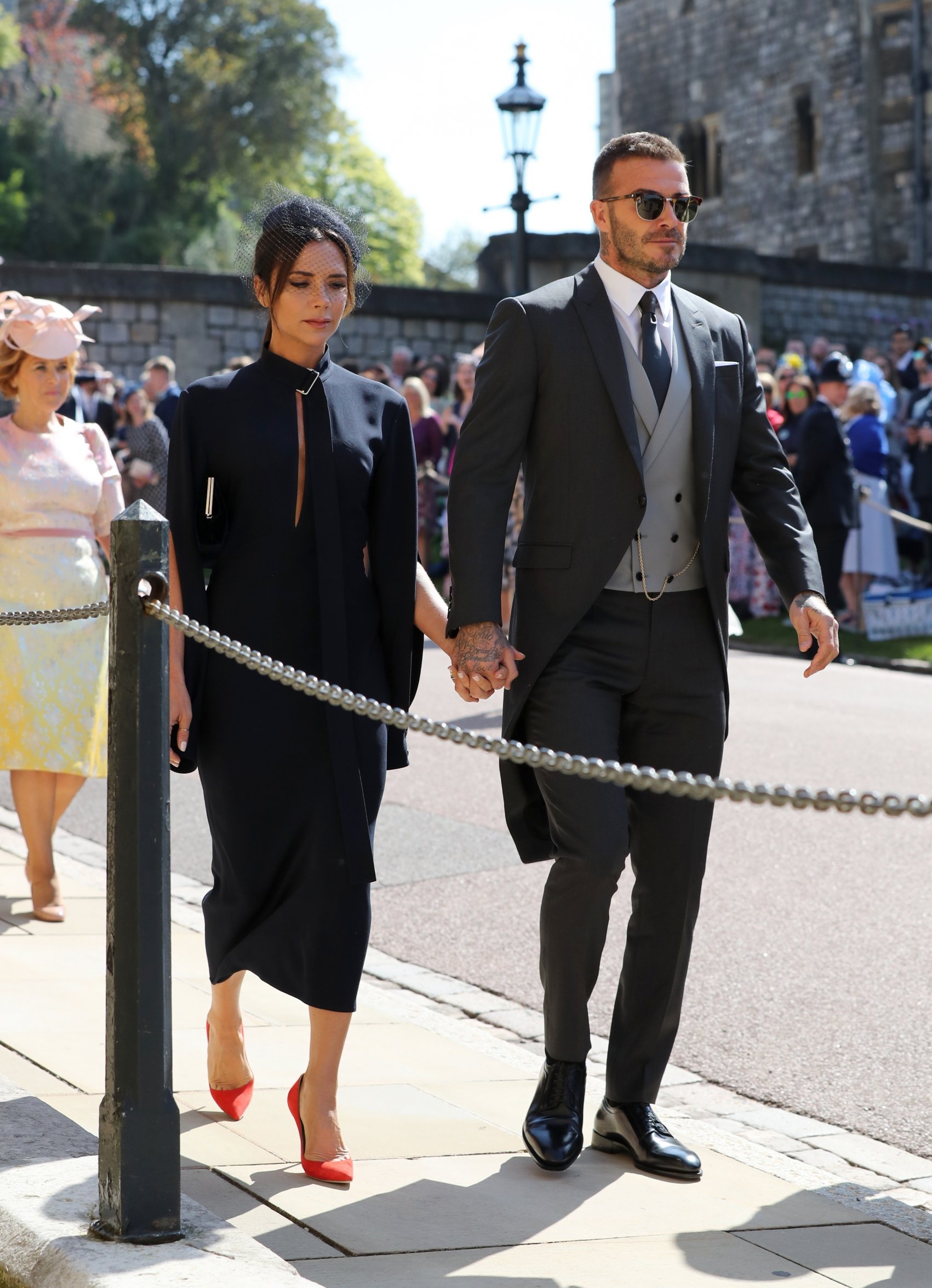 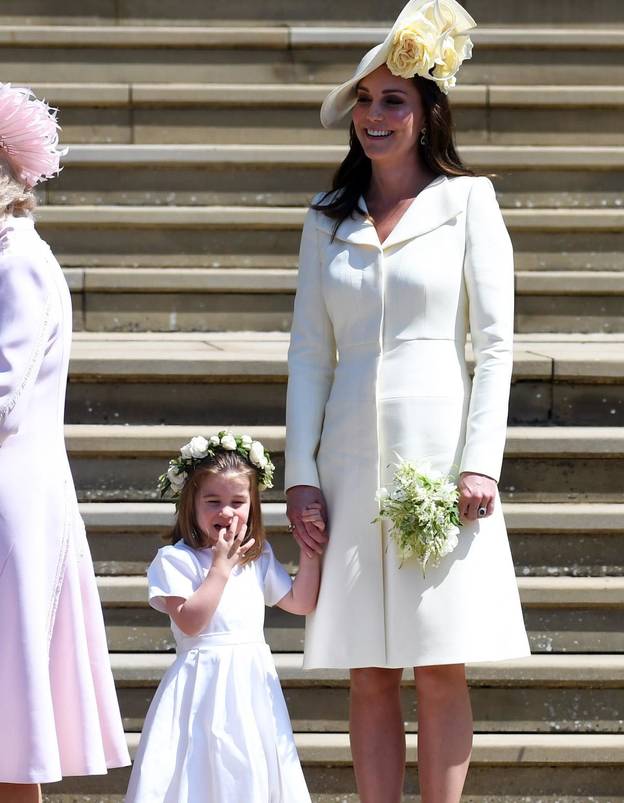 Prince Harry and Meghan Markle have asked for charity donations instead of wedding gifts.
The charities include women empowerment charity Myna Mahila Foundation, and the Wilderness Foundation two of the seven personally selected charities. 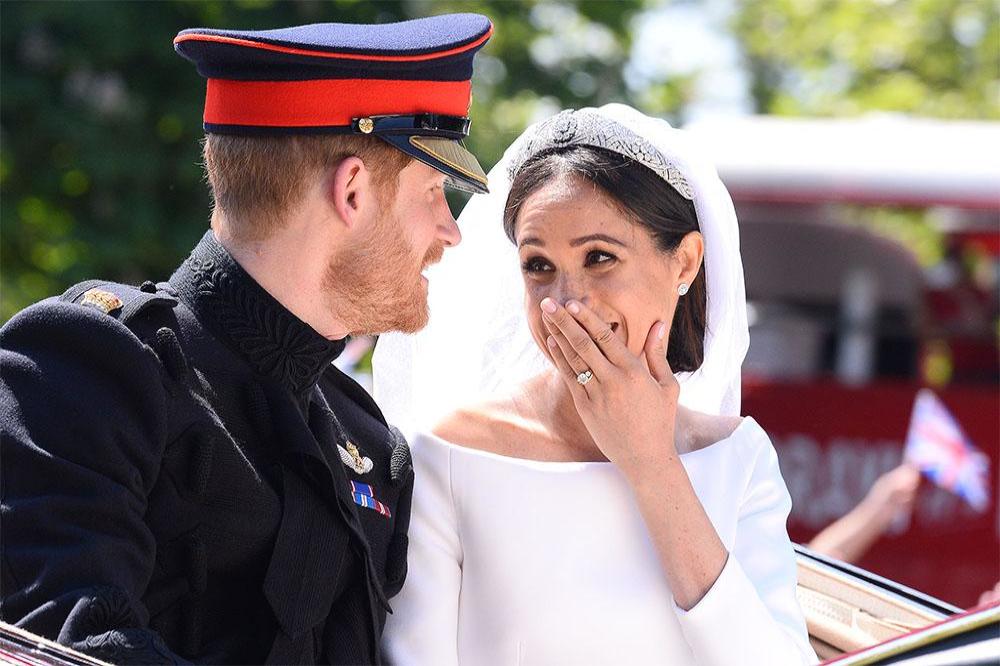 Stunning intimate photo of the royal couple in black and white akin to their engagement shoot, where we see Harry and Meghan on one of the terraces of Windsor Castle. 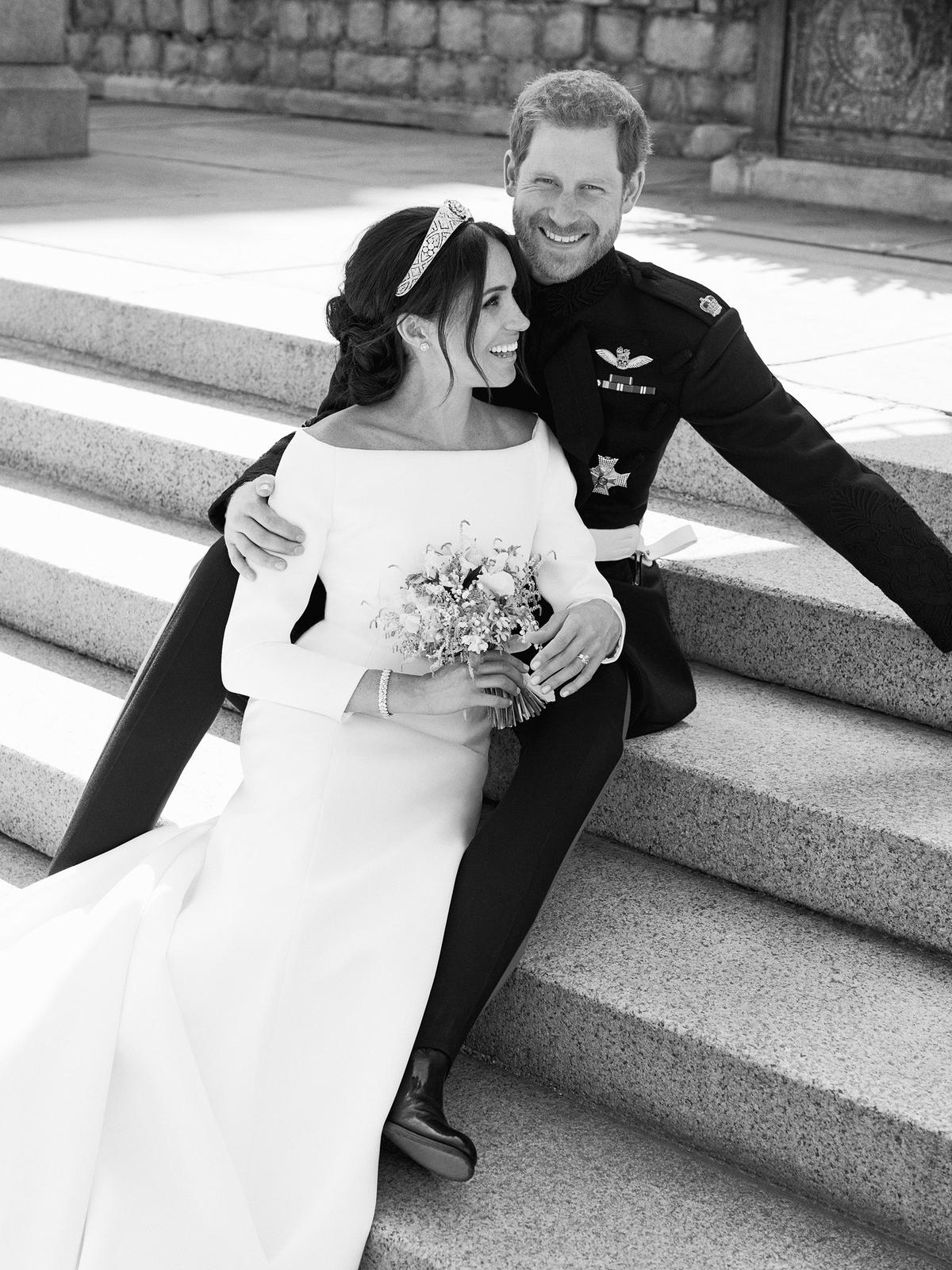 Contact us to begin planning your ROYAL Wedding in Ireland!